National Novel Writing Month is only a few short weeks away, and as thousands of writers prepare for thirty days of literary insanity, it’s fascinating to learn — via this post from Tom Nissley at The Millions — that my favorite Russian novelist Fyodor Dostoevsky faced his own NaNoWriMo challenge in the autumn of 1866. More detail on this can be found in volume three of Joseph Frank’s epic five-volume Dostoevsky biography, The Miraculous Years: 1865-1871.

A compulsive gambler whose finances were always somewhat precarious, Dostoevsky found himself deeply in debt, and in order to pay off his creditors, signed an extortive contract with the shady publisher Feodor Timofeevic Stellovsky. The contract stipulated that if Dostoevsky failed to deliver a novel to Stellovsky by November 1, the publisher would receive rights to all of Dostoevsky’s future work and would not have to pay any royalties for nine years. Consumed at the same time with the writing of Crime and Punishment, which he’d been working on at the summer resort of Lublino near Moscow, Dostoevsky returned to St. Petersburg in October having made little progress on the project he owed, The Gambler. In a letter to his friend Milyukov, Dostoevsky wrote: “Stellovsky upsets me to the point of torture, and I even see him in my dreams.” 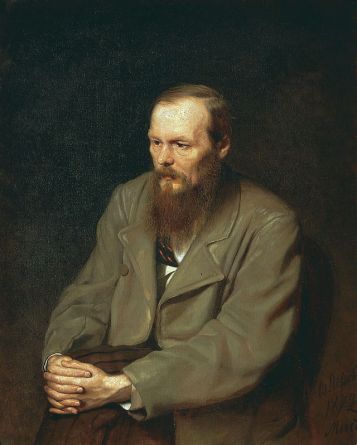 When his friend came to visit him, Dostoevsky was pacing in terrible agitation. Frank describes the scene:

Just a month was left to satisfy his part of the bargain and nothing had yet been written; even if he managed to write a first draft, it would be almost physically impossible to transcribe and correct it in time to meet the deadline. Milyukov, horrified at what might occur, suggested that a group of Dostoevsky’s friends take the plan already prepared and each write a section; this collective effort could then be submitted and published under Dostoevsky’s signature. “No!” Dostoevsky answered firmly. “I will never sign my name to other people’s work.” Milyukov then advised him to find a stenographer and dictate the novel; this would speed up the process of composition considerably and, in particular, shorten the amount of time necessary for the physical preparation of the manuscript. Never having dictated any of his work before, Dostoevsky was quite reluctant and doubted whether he could create in this fashion; but he finally agreed to make the attempt as perhaps the one possible solution to his dilemma.

His friend then appealed to a professor of stenography–courses in this subject were being offered to Russian women for the first time. The professor sent one of his best students for the job: Anna Grigoryevna Snitkina. Though Dostoevsky was at first very uncomfortable with the new arrangement, compulsively offering Anna cigarettes that she declined, the two warmed to each other and began to have intimate conversations after their dictation sessions. Anna was twenty-five years his junior, but she had great respect for his work and wrote that “I would miss him when I was at home and lived only in expectation of the next day’s meeting with him.” Writers of historical romance, take note! You may have a subject for your novel this year.

Thanks to Anna’s help, the manuscript was on track to be completed before the November 1 deadline. However, the dastardly publisher Stellovsky was not yet ready to concede those future royalties. Frank’s account continues:

Stellovsky would stop at nothing to prevent Dostoevsky from meeting the terms of the contract, and Dostoevsky “began to be afraid that Stellovsky would contrive some kind of trick … would find a pretext for refusing to accept the manuscript.” The resourceful Anna consulted a lawyer about the matter, who advised registering the manuscript with a notary or with the police officer of the district in which Stellovsky lived.

Indeed, when Dostoevsky tried to deliver the corrected manuscript on November 1, the publisher was nowhere to be found, having “gone out of town,” and his assistant claimed not to have the authority to accept the submission. (Publishers! They never change, am I right? Just kidding, publishers.) With two hours to spare, the writer brought the manuscript to the police officer of the district where Stellovsky lived and obtained a receipt, thus narrowly avoiding the awful consequences the contract had set up for him.

The novella The Gambler drew on themes that Dostoevsky knew well, not only from his hours at the roulette table. One could argue that we also gamble at the writing desk. In the work that speaks to us, the stakes are high, something is risked. The process can develop and release its own compulsive energies. That is what NaNoWriMo is about to me: throwing it all down on a creative bet that might, just might, pay off. A century and a half later, The Gambler is being adapted into a feature film — not bad longevity for a month’s work.

On the verge of financial and creative disaster in 1866, Dostoevsky found not only an escape from the trap his publisher had set for him — he found a connection with a bright young stenographer who would soon become his wife, who would inspire and support* him through the rest of his days. So if you aren’t sure if you want to participate in NaNoWriMo this year … you’ll never know what might happen to you, unless you play.

November’s NaNoWriMo events at Central Library will include guest speakers, writing prizes, and a late-night writing marathon on November 15. Check out the full PDF here: 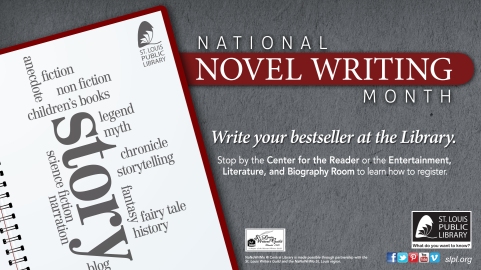 * – this also included pawning her jewelry and fur coat to pay his gambling debts. Dostoevsky notoriously pawned his own wedding ring and coat to pay off roulette losses — he quit gambling in 1871.